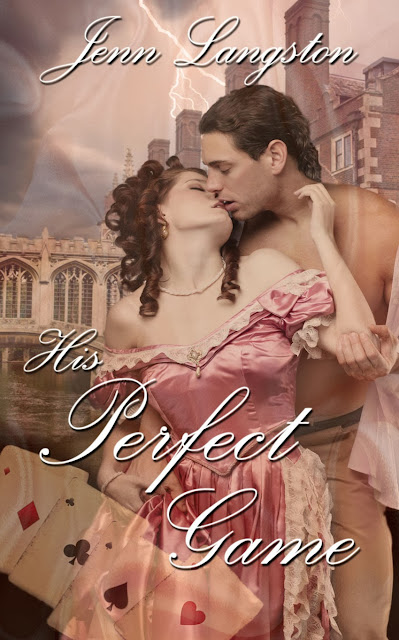 His Perfect Game
by Jenn Langston

Greyson Thorpe, Viscount Merrick, wants respectability above all else. Knowing the fastest way to achieve that state comes through marriage, he challenges Hammond Everett, the Duke of Donetic to a card game. After winning the match, the duke agrees to exchange his daughter’s hand in marriage for the forgiveness of his debts.
Willimena Abigail Everett had no desire to marry after experiencing the violent nature of men at her father’s hand. When Viscount Merrick arrives, she has no choice other than to obey her father and marry him. Will she be able to set aside her previous beliefs about men and judge her husband by his own merits?
After obtaining good social standing, Greyson sends his bride to the country;
however, he finds himself missing her. Following her to the estate, he discovers she had been living a double life. Will he discover her secrets and control his burning desire for her at the same time? 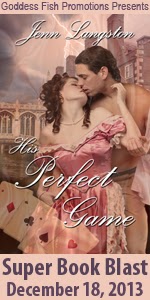 “Willimena,” her father snapped, drawing her attention back to him. “I have found a husband for you.”

Abigail gaped at her father. Shock robbed her of the ability to speak. After years of avoiding the fate she would suffer with a husband, in one instant, all her efforts had been rendered useless.

Her head spun. Surely this was a bad dream, or at the very least a misunderstanding. Sliding her eyes to the unknown man, she hoped he would refute her father’s words. Unfortunately, his unblinking stare only served to confirm it.

As she surveyed him, steely grey eyes assessed her from under dark lashes. His black hair was cropped short around a masculine face. A dusting of hair shaded his cheeks as if he had forgotten to shave that morning. Standing taller than her father, she found him to be quite an imposing figure.

“This is Viscount Merrick, and, as of right now, you two are betrothed.”

Jenn will be awarding a digital copy of "His Perfect Game" to two a randomly drawn commenters during the tour, as well as to two randomly drawn hosts. 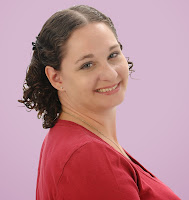 Jenn Langston graduated from the University of Houston with a BBA in Accounting and a minor in European studies. Although working as an accountant and mother, she still finds spare time to write. She has always been fascinated with London during the 1800s, and her historical romances express her love of the time period.

When not writing, Jenn loves spending time with her husband and three children. Some of their favorite activities include camping, bowling, and visiting the museum. She also loves reading romance of any kind, and normally is seen with her Kindle close by her side. 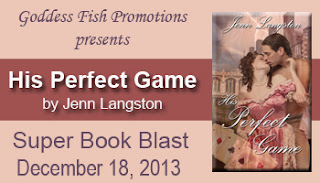 Posted by Christine Elaine Black at 17:46