A Word from Nancy Jardine 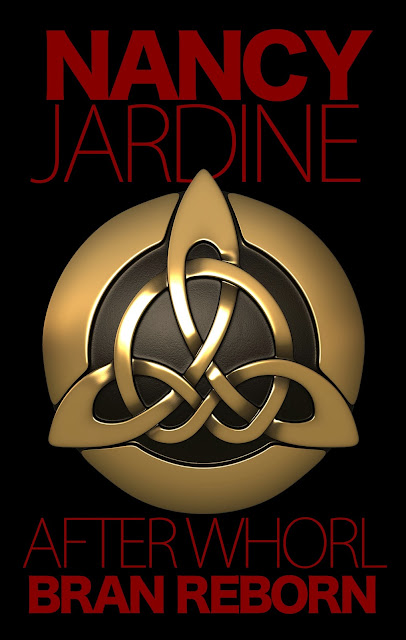 My sincere thanks for inviting me to share details of my latest historical romantic adventure, After Whorl: Bran Reborn, Book 2 of my Celtic Fervour series. After Whorl: Bran Reborn continues the story of Brennus of Garrigill who appears in Book 1 The Beltane Choice. Brennus was thought to lie dead on the battle fields at Whorl, but this was not so…

(Book 3 of the series After Whorl: Donning Double Cloaks continues the tale of Brennus (also known as Bran) and Ineda of Marske, and will be published sometime around March 2014)

…AD 71. After the battle at Whorl, Brennus of Garrigill is irrevocably changed.

Returning to Marske, Ineda finds her grandmother dead, though Brennus is not. Snared by a Roman patrol, they are marched to Witton where he is forced to labour for the Roman IX Legion.

Embracing his new identity as Bran, Brennus vows to avert Roman occupation of northernmost Brigantia. Ineda becomes his doughty spying accomplice, though sometimes she’s too impetuous. Trading with the Romans lends excellent opportunities for information gathering. Over time, Bran’s feelings for Ineda mar with his loyalty to Ineda’s father.

When she disappears, and cannot be found, Bran enters direct service with Venutius, King of the Brigantes.

“Fóghnaidh mi dhut! I really will finish you! I have you now, invading scum!”
Another couple of whacks would have the shield gone. The Roman auxiliary’s arm already showed signs of fatigue as Brennus slashed below the man’s chain link protection, his full power backing each blow of his long Celtic sword. The man was brawny, a practised opponent at the edge of the tight cluster of Roman bodies, but was much smaller than he was and rapidly weakened. Brennus knew the advantage he had. A drained grin slid into a grimace of pain as his sword jarred on the Roman gladius when the soldier’s stab interrupted another of his blows, the impact juddering his weakened elbow, an injury sustained with a previous combatant.
“Diùbhadh! Scum!”
The gladius flashed upwards. To reach his head the angle of the auxiliary’s attack had to be higher than the usual, demanding a different force to succeed, and the Roman just did not have the strength any more.
A cry of frustration emerged from the Roman, the clenched teeth an indicator of the man’s tenacity as the gladius prodded forward yet again. Brennus understood none of the man’s tongue, the battle ground not the place for meaningful talk, but the intent was clear.
“Come! Come forward! A ghlaoic! You fool!” Brennus’ hollering taunts and crude ridiculing gestures gained him a little ground as the auxiliary broke free of the rigid formation, desperate to gain conquest over yet another Celtic adversary, the shorter gladius slashing and nipping at his chest but not quite breaking the skin.
The tight group of Roman soldiers had been almost impossible to breach; their raised cover of shields an impenetrable barrier. He had been toying with and provoking this particular soldier for long, long moments. Yet, even with his superior strength, he knew he could not sustain such weighty combat for much longer either, before he would need to retreat to regain his reserves of vigour – though only a little more wearing down of the man’s resistance should be enough. He knew that from an earlier experience. Drawing breath from deep inside he slipped back a pace, and then another as if giving up the pursuit.
“Come forward, you piece of Roman horse dung! You demand the blood of the Celts? Let it be so! Have mine!”
Powerless to resist the lure the Roman soldier surged at his bidding, his shield swinging, his gladius jabbing. One last twisted swipe of Brennus’ longer Celtic sword detached the blade-nicked shield from his foe and sent it sailing aside. Abruptly unguarded, the auxiliary pulled his gladius in front of his rippling mail in a futile attempt to cover his chest.
“Too late!” Brennus’ snort rang out as he whacked the soldier’s fist with his shield when his opponent readied his blade for another stab. It was enough: all the leverage needed to topple his foe. Witnessing the Roman’s slithering attempts to right himself he allowed an exultant smirk to break free, knowing victory would be his over this particular rival. “Death to all of the invaders!” 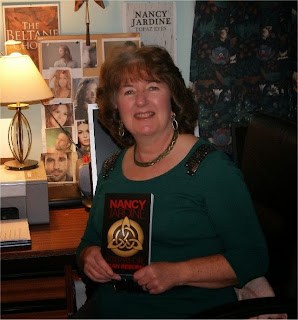 Nancy Jardine lives in the fantastic ‘castle country’ of Aberdeenshire, Scotland, with her husband. She spends her week making creative excuses for her neglected large garden; doesn’t manage as much writing as she always plans to do since she’s on Facebook too often, but she does have a thoroughly great time playing with her toddler granddaughter when she’s just supposed to be ‘just’ childminding her twice a week.

A lover of all things historical it sneaks into most of her writing along with many of the fantastic world locations she has been fortunate to visit. Her published work to date has been two non fiction history related projects; two contemporary ancestral mysteries; one light-hearted contemporary romance mystery and a historical novel. She has been published by The Wild Rose Press and Crooked Cat Publishing.

You’ll find Nancy at the following places: Amazon UK author page    Amazon US author page   Blog    Website   Facebook  Goodreads   About Me   LinkedIn   Twitter @nansjar  Google+
Thank you so much for sharing my launch tour with me. Happy reading, everyone!

After Whorl: Bran Reborn is available from Amazon UK http://www.amazon.co.uk/After-Whorl-Reborn-Nancy-Jardine-ebook/dp/B00H8ZTYA2/

After Whorl: Bran Reborn is available from Amazon.com

After Whorl: Bran Reborn will be available in e book formats from the 16th December at Smashwords http://www.smashwords.com/books/view/388002


Posted by Christine Elaine Black at 15:51