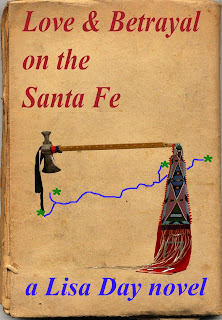 Usually Lisa Day is the one asking What's this? to her blog guests. Today she's the one doing the answering. :)

What's the title?
Love & Betrayal on the Santa Fe

What's the setting?
1859 on the American frontier. The Santa Fe Trail.

What are the names of your leading characters?
Tasa
Calico
Wade Masterson

What are 3 things you want to share about each of the characters?

Tasa: While on a buffalo hunt evil white men attacked his village killing his wife. He went on a trek for revenge that left him without a heart and soul. Masterson was the only person to treat Tasa with any civility until the day he stood in front of Calico. He was a guide for Wade Masterson.

Calico: Alone in New York City with a bleak future as a downstairs maid to the more affluent she wanted more for herself. Hoping to find love if not at least security she ventured to meet the man she had been corresponding with and plans to marry. She heads west to Fort Union in the New Mexico territory. Calico wasn't prepared for what she discovered.

Wade Masterson: Six women found themselves under his care as part of the wagontrain on the trail. Masterson has secrets. Secrets that would put everyone of the women in danger.

What can you tell us about the story in 3-5 sentences?
A total of six women will travel to meet their husbands-to-be. The normal stresses of mixing personalities of the women will fade into nothingness when compared to when their unexpected betrayal is revealed. The women learn appearances can be deceiving and the lines between those thought to be savage and those thought to be civilized are blurred and crossed.

Posted by Christine Elaine Black at 11:50