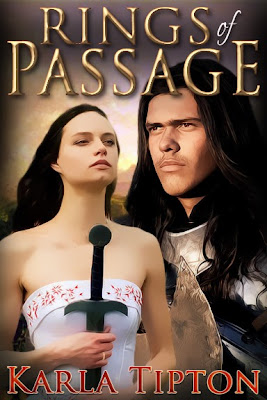 Twenty-first century actress Anise Wynford stumbles down the porch steps of her farmhouse in Massachusetts and into the nightmare of a raging battlefield of armor and sword fighting. When she later awakens in a medieval forest in the presence of a gallant white knight, their connection is immediate. Concerned for her safety, the knight carries her to his castle.
Her knight turns out to be King Richard III, the villain of Shakespeare’s most famous play, in which Anise had been performing that very night. The truth dawns that she has been transported through time by a ring – a magical ring –  she had found hidden in her late father’s house.
As Anise navigates the complex rules of politics and etiquette in the king’s court, she falls in love with Richard and he with her. But Anise knows Richard is destined to die in the Battle of Bosworth Field. If Anise chooses to save his life, she will alter the course of history.
As Anise becomes drawn into the struggle between York and Lancaster, circumstantial evidence stacks up against her, and she is arrested for plotting against the king. With no other choice, she confesses to Richard she comes from a future century. The king accuses her of witchcraft and treason, and orders her into the custody of the duplicitous and lecherous Lord Stanley, who convinces her she will be executed unless she sleeps with him. As Stanley conspires against the king to put his nephew Henry Tudor on the throne, Anise learns that her trip through time was part of a magical plot by dark wizards to overthrow Richard.
Can Anise escape her death sentence, and save Richard from his tragic destiny on the battlefield? After the way he turned on her, does she want to?


Hello Karla, and welcome to Romancing the Novelist. My first question is always what draws you as a reader to the romance genre?

I really love the relationship dynamics between two people. When life throws them a curve ball, or they find themselves in incredible circumstances, or under extreme pressure, I like to watch what lengths of courage they will go through to be together.

I love reading romance with those elements. What is the most difficult part of writing a love story?

What’s hard for me is achieving that magic, that chemistry between two characters. I’m a daily soap watcher. When the scriptwriters write a plot that demands two characters become a couple, and the actors portraying those characters have absolutely no romantic chemistry, the whole thing falls flat. Occasionally, they have that super couple vibe going on, and those are the storylines everyone wants to see. Luke and Laura, Victor and Nikki. The same thing happens when writing romance. Sometimes the hero and heroine just “click.” Those are the couples I want to star in my novels.

It depends on the novel. “Rings of Passage” was the final working title in a long line, and my critique group actually came up with it. Originally, I called it “Battle Against Time,” which is what popped into my head when I came up with the premise. But it’s kind of trite. I had also called it “Shakespeare’s Child” at one point. I’m grateful for my critique group’s suggestion, a twist on “Rites of Passage.” The title of the novel I’m polishing now is called “Dangerous Reflections.” It came to me almost immediately. So I either come up with the title right away, or the whole process is totally painful, haha.

Your title is fantastic. It conveys the idea of time travel very well. Do your characters love the direction you take for them or do they have other ideas?

They most definitely go their own way. I learned quickly in early novel attempts that I can’t follow an outline. I would draw up elaborate plot-driven outlines, which would go off track by the third page of writing. And what was happening in the place of my complex and detailed outline turned out far better than what I had put so much planning into. So I stopped going through that exercise in futility. Now I plot about three chapters ahead, which allows me to base the near future events on the current chapter. The novel grows organically that way, and doesn’t feel forced into a mold. When characters take over and drive the plot, that’s what you want to happen. Lawrence Block, and also Stephen King, have both said, if the writer is surprised by what plays out in the book, then the readers will be, too.

Well I'm glad to hear that Stephen King would approve of the way we write. My characters take over all the time. :):) Any tips for writers that you'd love to share?

Have faith in your creative process. Don’t stress about writing the next chapter, even if it seems like it will be a difficult one. If you start it, then there’s a good chance it will write itself. If you are a new writer, practice by writing some fan fiction and posting it online, chapter by chapter, in what’s called a WIP or work in progress. You will be encouraged by the reviews you get, and be motivated to produce the next chapter. This is exactly what Charles Dickens did when he published chapter by chapter in the serial publications back in England during the Victorian era. He made it up as he went along. It’s amazing what tight corners you can write your characters out of when there are fans screaming for more. It’s a trial by fire. After you finish a WIP under that pressure, you can seriously begin to trust that your creative process will come through when you need it.

The novel I’m working on now is “Dangerous Reflections,” a time-travel-fantasy-historical-murder-mystery romance, set in 1910. There’s a magical and very hot romance at the heart of this story. It’s sort of like Harry Potter for adults. The heroine Martie learns from her dying grandmother that she’s a wizard. Martie walks through a magic mirror and straight into the arms of a wizard, Alastor, who has beastly manners and an animal magnetism to match. This couple definitely has chemistry.

Thank you for guesting on my blog, Karla. It's been a pleasure!
Buy Link for Nook
Buy on Amazon

Excerpt set up: Anise is wearing a magic ring which gives her the power of empathy.
After her meal, Anise tried to stay awake, but the crackling of the flames in the hearth and a full stomach lulled her to slumber. When she opened her eyes, she caught a glimpse of a shadow on the wall.
“Is that you, Madam?” Her words were thick with drowsiness.
The figure in the room moved into view and she came fully awake. “Your Grace!” she sat up in the bed. “I did not expect for you to come so soon.”
Richard was richly dressed in a jeweled doublet of purple velvet and black hose that disappeared at the ankles into pointed shoes. The rings on his hands glimmered in the firelight.
He smiled nervously. “I came as soon as I heard you were better. I hope… you do not mind?”
Anise’s mouth went dry.
“My mother informed me of your recovery. Did she say how grateful I was for it?”
Startled, Anise did not know how to answer. She sensed his strong attraction for her through the ring, and was taken aback. “Where… where is the duchess?”
“She has retreated to the chapel. Damsel Juliann is beyond the door. Are you in need of her?”
Anise shook her head. “I-I…”
Richard seemed embarrassed, seemed to be searching for the right words. “I know ’tis improper to come into a lady’s bedroom unescorted. ’Tis not usually my way to flagrantly take advantage of my position. But, well... I-I wanted to see you – I mean, see for myself that you are better. You do not mind?”
Anise smiled. “No – I’m happy that you’re here.” Goose bumps covered her arms. This was fever of another kind.
He approached the bed. “I am glad.” His voice was soft. He found her hand, which was resting at her side, and held it tenderly. Anise could not take her eyes off his face. But Richard gazed only at his hand holding hers. “'Your call for the bath – my household cannot stop talking of it. Are you a healer?”
Her voice came out in a hoarse whisper. “I-I witnessed it in my travels… in another country… far away.”
“’Tis a miracle.” The king raised the back of her hand to his lips. “I was so worried.”
His eyes found hers, and she saw the relief in them.
The floodgates of his emotions fell open, and Anise could not tell where her affection for him ended and his for her began. Her mouth fell open, but she could not speak. Richard whispered, “Say nothing.” He sat on the bed and leaned toward her, and Anise welcomed his lips on hers. She rested her hand on his shoulder as his mouth devoured her, falling backward into forever as their doubled passion blissfully engulfed her.
Then it was over. Richard’s rolled his affection up inside himself. “Forgive me. I should not.”  His words were abrupt. He straightened, began to get up. “I have no right.”
Anise’s hand was still on his shoulder. She would not let him go. “I do not mind, Your Grace. I—I...” The words caught in her throat. “Please – stay.”
Surprise lit the king’s face, and the tenseness around his mouth relaxed. He took her hand from his shoulder and held it between his. “Jesu, sweet lady. What ’tis it I'm feeling?”
His confusion mingled with her desire. Their eyes met. She longed for him to take her in his arms. 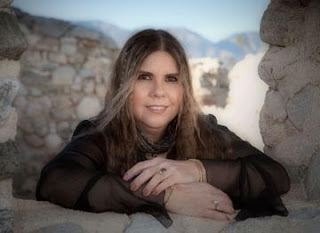 Karla Tipton cut her literary teeth on gothic romances, Edgar Allan Poe and the vampire soap “Dark Shadows.” Long before there were sparkly vampires roaming through the cultural consciousness, she wrote about ordinary women time traveling through history and falling in love with powerful men of myth and magic. “Genre-bending” came naturally. Despite publishing industry advice to find a genre and stick with it, Karla shamelessly mixed it up, blending history, paranormal, time travel, fantasy and mystery into her novels. When she became fascinated with Richard III, she made a research trip to England, so she could lend authenticity and historical detail to her novel about a romance between a modern woman and her favorite medieval king.
“Rings of Passage,” a time travel romance set in medieval England, is Karla’s first published novel.  Time travel and magic are also at the heart of the project she’s just wrapping up, “Dangerous Reflections,” a romance about a twenty-first century post-graduate student and an Edwardian-era wizard.
Karla is a member of Romance Writers of America, and her writing has earned top honors in several RWA chapter competitions.
When not at her government job or writing novels, Karla plays guitar in a classic rock band.

Posted by Christine Elaine Black at 14:52