Hello Lynda, and welcome to my blog. As always I'm wondering what draws you as a reader to the romance genre?

I am a certified hopeless romantic.  I have to have the happily ever after.  It’s one of the reasons, that even though I have always thought Gone With the Wind was an incredible read (and movie), I was always disappointed by the ending, because there wasn’t the HEA.  That’s why I was happy to see the novel Scarlett when it was announced that it would be a continuation of the GWTW storyline.  Unfortunately, I was ultimately disappointed in Scarlett, but that’s a whole other story, in itself, no pun intended.

Wow…after trying to make the motivation right, putting the characters through all the trials and tribulations I put them through to create the necessary tension, the most difficult part is letting them go.  I become so attached to the characters that I don’t want to let them go.  They will continue to stay with me for a long while after I finally type “the end.”  I find myself reading and rereading their story lines, and imagining more scenes for them.  My current WIP has two characters I am very much attached to and I’m finding it incredibly hard to let go of those two.

That's a good point. Once the book is done we can't go back and add more scenes or tweak the story. Is creating a book title easy for you? Tell us about the process.

I usually don’t name a book until I’m well into it.  Prior to that, it’s just named for the two main characters, simply because Word won’t let me save a document without a name and I can only name so many documents as WIP1, WIP2, and so on.  By the time I’m more than halfway through writing a story, titles have started to form.  The Devil’s Own Desperado was originally titled Rolling Thunder because during the writing of that one, DH and I were on vacation in Wyoming and during a thunderstorm, one sharp crack of thunder sounded like a gunshot and then the echo of it rolled from one side of the valley to the other and back again.  It was about the coolest sound I have ever heard, and I named that piece for that sound.  However, I wasn’t totally attached and set on that being the title, so when my editor suggested a different title, I was fine with the change.

That is a laugh out loud question.  My characters go where they want, when they want, and I’m just along for the ride.  I’m currently trying to revamp the very first romance I wrote and I swear my characters are standing over my shoulder, shouting, “You can’t write it like that. It wouldn’t have ever happened like that.”  A lot of it has to do with the fact that by the time I start writing, I have created a very detailed and intricate backstory for the two main characters, so I know them very well.  It’s also how I can keep introducing Marshal Taylor into so many of the western historical romances I’ve written, and know his story line will be consistent when I finally get around to writing about him and the love of his life, Rachel.

Funny how our characters talk to us and tell us what they want. Any tips for writers that you’d love to share?

WRITE!  Don’t stop writing.  Keep writing.  Send that manuscript out, forget about it, and start writing the next one.  If you believe you can stop writing, you’re not a writer.  The thought of walking away from writing (even if I’m never published again) is a terrifying prospect.  I think I could just as easily give up breathing.

Yes, once you start writing it becomes addictive. Tell us about your next book.

My next book has come back from my editor, with her suggestions.  I’m working on the second romance set in the town of Federal, Wyoming Territory, and this book is the story of how Rebecca and Dr. Cole Archer ended up together.  I introduced Dr. Archer and Rebecca in The Devil’s Own Desperado, so some of the characters should be familiar to anyone who has read that book. 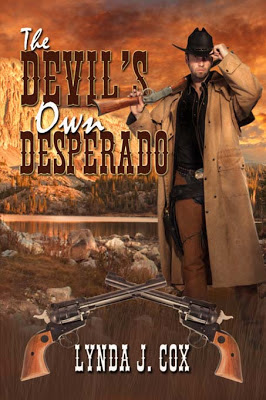 He’s everything she fears…

Wounded gunfighter Colt Evans stumbles onto a remote homestead never expecting to find compassion. But beautiful Amelia McCollister is like no other woman. Suddenly, his dream of settling down with a wife and home is within reach—but only if his past never comes gunning for him.
She’s everything he dreams of…
Amelia had to grow up fast after outlaws murdered her parents, leaving her to raise her siblings alone. With a young brother who idolizes shootists, she dreads having a notorious gunman in her home. But as Colt slowly recovers, he reveals a caring nature under his tough exterior that Amelia can’t resist.
Just when Colt starts to believe he can leave the gunfighter life behind, his past returns, bringing danger to them all. Can a shootist ever hang up his hardware? Or will their dreams disappear in the smoke of a desperado’s gun?
Read an excerpt:
She cleared the plates from the table. “I’ll start some water heating for your shave, Mr.—”
“Colt. My name is Colt,” he interrupted.
She froze for a moment near the stove. “I would feel very forward to address you by your given name, Mr. Evans.”
His laughter boomed through the room. Amelia whirled. His head was tilted back and the strong cording of his throat stood out in relief. “Amelia, you didn’t have a problem taking care of me while I was unconscious and naked as the day I was born, but you think it would be forward to use my given name. There is something that doesn’t add up there.”
She twisted her apron between her hands, staring at the floor. A moment later, Colt caught her chin in his palm and tilted her head to him. She hadn’t heard him cross the floor. Her breath caught in a mingling of fear and some nameless anticipation.
“My name is Colt. Try it, Amelia. Colt.”
Amelia’s skin burned with the light touch of his fingers and her heart hammered against her breastbone. She wet her parched lips.
“It’s a simple name, really. Four little letters. Colt.”
Her throat was frozen. She was falling into the depths of his gray eyes. The pad of his thumb brushed along her lower lip. The butterflies returned to her stomach and that curious ache renewed. She shook her head, freeing herself of his gentle hold. She staggered a step away and broke the spell.
Buy@WildRosePress
Buy@amazon

Posted by Christine Elaine Black at 05:14