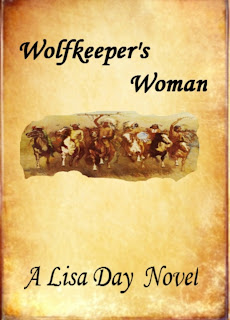 Yay, today I have Lisa Day with me on Romancing the Novelist. I've been trying to catch her for an interview after her recent release of Wolfkeeper's Woman.

Hello Lisa, first question I ask is ususally what draws you as a reader to the romance genre?

I can expect a Happy Ever After ending. Unlike the real endings life sometimes throws at us. I guess I also like the escapism they offer the reader. Your own cares disappear as the hero and/or heroine find their way through adversities to find true love. Ahhh...

I love a happy ending too. What is the most difficult part of writing a love story?

Using words to get the emotional response correct for the reader. As the author you know how you want the reader to feel during certain scenes. If you don’t move them emotionally to either laugh or cry with you then they won’t enjoy the story.

Usually yes. The title comes to me early on. It becomes sort of a goal. The goal of the story. For example "Ghostwoman" which was the original title for my latest book. I kept focus on structuring the tale around her and why she was called that. I changed the title at the last minute when I felt ‘Wolfkeeper’s Woman’ was a stronger title for marketing.

Haha. The characters love the direction I use as long as I use the direction they want to go. Every writer I believe has sat back and said, ‟Hey, that’s not what happened.” When the little darlings choose to go off script. And sometimes where they lead isn’t so bad.

Just do it! You’ll be sorry you didn’t in the years ahead.

Tell us about your next book.
I’d love to, but it’s just started yesterday as matter of fact. I could say it’s a story about... However, those characters already created, and those soon to be, might have something else totally in mind. Check back in a month or so.

Lol, we'll check back for sure, Lisa. Thanks for the intereview!

Wolfkeeper:
A furiously proud Indian warrior Wolfkeeper killed her husband and stole her infant son. Hate for the white people filled him. He had need of the child. His goal; the child must live.
He needed the mother to accomplish that goal. When lust grew he wanted more than just her body. He wanted her heart and soul. Not anyone or anything would stop him from his goal. When she refused, he decided to take them one small piece at a time.

Cassie:
A woman alone with her husband dead and son abducted. She stood before the one she hated. Her only goal: the child must live.
Cassie soon discovered she had two battles to fight. She needed to protect herself from him.. He had total control over their lives. But, now he was demanding her surrender to him. She also needed to save her son. She would do whatever it took to protect him.
Only the ultimate mother’s sacrifice would save the child, but would it save her from him?

Smiling, Wolfkeeper knew at least this night her fear of physical aggression from him would be only in her mind. He did wonder why thoughts of future nights with her stirred his blood.
Wolfkeeper left the blanket when Prancing Bear came with the child in the morning. Taking her son, Cassie wrapped the two of them together. Instantly, the hungry child took to sucking on her full breast. All too soon, Wolfkeeper came to take the boy.
Afterwards, he handed her five containers to fill with water, and pointed to a small creek in the brush. Still wrapped in the blanket, Cassie moved to the creek. She filled three skin bladders and two canteens. Noticing she left his flask for last, she smiled.
‟I’ll fix you.” Cassie stirred the spot in the creek she used and let the dirt enter the canteen with the water, so that more dirt than water filled it.
Returning with her burden, each man took his own water supply from her. Cassie handed the gray metal one to Wolfkeeper. He took the blanket from her, as he prepared the horse for the day’s ride. The six riders and one child continued their ride. Only five riders looked forward to reaching their destination.
***
The sun moved high in the sky before they took a much-needed break. The day before, Swift Arrow shared his water with her. Thankfully, Cassie had Timothy at her breast when Wolfkeeper took a swig from his canteen and immediately spit it out.
He closed in on her, and stopped dead in his tracks when he saw the child with her. It now became a battle of wills, as he stood still as a rock, while staring down at her.
Cassie had waited all morning for this. She had wanted to have a good laugh at his expense. But she wasn’t laughing. Prancing Bear was coming for her son.
"Damn, damn,” she grumbled as the Prancing Bear was coming for the boy. The baby was taken away.
Wolfkeeper squatted down close to her. He pushed the canteen into her hand and said, “Drink, stupid woman. DRINK!”
There was nothing she could do, except drink. Ever so slowly with her eyes locked on to his, Cassie tipped the container to her lips, hoping the dirt would remain settled if she gingerly drank.
"No, this way woman.” He grabbed the canteen and forcedly tipped it up completely, so she received a mouthful of dirt the same as he. When she went to spit it out, his hand covered her mouth, stopping her. ‟Swallow it!”
Cassie didn’t need to understand his language to know what he demanded. She shook her head no.
“Swallow it!”
The dirt and grit filled Cassie’s mouth and throat as she did. The remaining grit irritated her teeth and gums.
The next time Swift Arrow offered her water, Wolfkeeper stopped him. He handed his metal canteen to her instead. Swift Arrow nudged his horse to return to the rear of the riders.Cassie handed the canteen back without bothering to drink from it. She noticed Wolfkeeper never took from anyone else’s water supply either. He went without as well. The supply she had ruined was his. He would accept the consequences for her actions, the same as she.

Posted by Christine Elaine Black at 10:47