Welcome to Romancing the Novelist, Joanne. So happy to have you as my guest. What draws you as a reader to the romance genre?

The love story. Watching two people fall in love. I could tell you it’s all about the struggle, about watching them defeat their demons, but I’d be lying. lol I like watching them fall in love. In a world full of hatred and violence, a good love story is a bit of hope. Something positive and uplifting, and I’m guaranteed a happy ending. A good one makes me cry.

Plotting. Taking these people’s stories and trying to showcase it the best way I can with an awesome plot. I don’t plot very well. It’s very difficult for me. It’s like I’ve got this misfire in my head. I get the concepts of how to create an awesome plot, but actually putting it into action for these characters in my head is very difficult. My characters aren’t real to me. They come to me with hopes and dreams and they tell me their story. But taking that and creating an actual plot around it? Eesh. You’d think it would be easy, but somehow, it’s the most difficult thing in the world for me. It’s the bane of my existence. lol

I’m not great at titles, either, but this isn’t as hard. Mine usually come to me, much like the characters do, a little surge of inspiration. Or maybe it’s a character whispering in my ear. ;) But when they don’t, I usually browse Amazon titles for inspiration and try to come up with a key word or phrase that describes what the story is really all about, at its heart.

I’m a pantser. I let my character dictate where I’m going. I find a character driven book much more satisfying then a well-crafted plot. Maybe that’s why I can’t plot. lol So yes, my characters like where I take them, because really, I’m following them. I like to say I’m just the secretary—I’m just taking dictation.

That's a great answer. I love to read character driven stories too. Any tips for writers that you'd love to share?

Write from the heart. Forget trends and what’s “hot” right now and write what moves you, what fills your soul. Believe me, it shows. If you’re moved by what you’re writing…your readers will be too.

Oh gosh, that’s a tricky question. lol I’m currently about three books ahead of the game and I have no idea which one will end up hitting the “shelves” first. My agent and I are putting the finishing touches on a two book series we’re getting ready to find homes for. The series is called Taking Chances. It’s set in the state of Washington (where I live) and revolves around a small family. The first book is a previously published book that’s been revised and re-edited. This one’s a “friends to lovers” story. The second book is the hero’s sister’s story, and it’s got a ‘second chances’ theme.

The next one we’re getting ready to send out is a slightly longer book. An Army vet determined never to become like his abusive father discovers he has a son, with the only woman he’s ever allowed himself to love. Both are forced to face their demons in order to do right by their child. This one’s got a darker edge to it.

Thanks for having me, Christine!
You're very welcome to visit anytime, Joanne. :):) 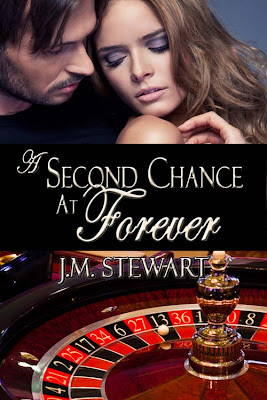 A Second Chance at Forever:

Recently divorced and working two jobs, Angela Lewis has no room in her life for love. Yet when her childhood crush finds her at the nightclub where she works as the sexy stripper, Candy Cane, and expresses his interest, Angela can’t resist. She only wants one night to live the fantasy her alter ego provides.
Alex McKinley is still trying to pick up the pieces of his shattered life, and one night with Candy is exactly what he needs. He gets more than he bargained for, however, when he discovers she's the little sister of his best friend.  Suddenly little Angie’s all grown up and driving him crazy.

The more time he spends with Angela, the more Alex finds himself falling for the woman she’s become. She makes him want to live again. But can he convince her to take a chance on him?

He rolled his eyes and swung his legs over the side of the bed, shoving a hand through his hair, disheveling it. “And nobody’s called me A.J. since high school. Brock doesn’t even call me that anymore. You should have told me.”

He was right. She’d been a coward. She hadn’t wanted to face him, hadn’t wanted to see that look in his eyes, the one currently screaming at her. “Would you have invited me here tonight if you’d known, Alex?”

She didn’t need to ask. She knew the answer.

He darted a glance back at her. “You shouldn’t have lied to me.”

“You didn’t exactly tell me the truth either. You let me believe you were just a stripper from the club.”

Only minutes ago those eyes had held such passion and tender heat. Now they stared at her in furrowed accusation, with anger and regret.

“Would you have invited me here tonight if you’d known?” she asked again, every inch of her heavy as the weight of reality descended on her.

He didn’t say anything at first, merely glared across the bed at her. God they were sitting on the very bed they’d just made love on, both still naked, a fact that seeped into her pores and somehow only made her heart ache all the more.

Then his features softened and he jerked his gaze toward the curtained windows. Moonlight streamed in through a crack in the thick curtains, creating a bright streak across the tan carpeting. She could feel the wall that erected between them, watched it go up in the stiff set of his shoulders.

J.M. Stewart writes sweet and heartwarming contemporary romance with a touch of passion. She’s a wife, a mother, a spiritualist, and lover of puppies, and happily addicted to coffee and chocolate. She lives in the Great Rainy Northwest with her husband of sixteen years and their two sons. She’s a hopeless romantic who believe everybody should have their happily-ever-after and has been devouring romance novels for as long as she can remember. Writing them has become her passion.

Where you can find me on the web:

Posted by Christine Elaine Black at 21:23