Thanks for joining me today on my blog, Melissa. What draws you as a reader to the romance genre?

Being able to fall in love over and over again...sigh. The rush of emotion, the memories they evoke, the whole gamut of lust and longing, love and learning. Exploring relationships and different views of familiar emotions. Such wonderful worlds to visit.

Totally agree with that Melissa, but tell us what is the most difficult part of writing a love story?

Getting the emotions on the page in a comprehensive form. Emotions are messy, and so is writing them! I just write what's in my head, in my heart, especially during heavy scenes, both happy and sad, and then go back and try to make sense of them--make them readable so my critique partner and editor don't hate me. Most importantly, so readers understand what is in the heart and soul of the characters.

Coming up with a working title is fairly easy for me, but sometimes that title doesn't make it as far as submission, let alone publication! Wraith Redeemed was originally called Duty Bound, but The Wild Rose Press already had a novel published with that title. My editor, Eilidh, and I went through a couple of options before we settled on Wraith Redeemed.

Not always! I definitely know when they do and when they don't. I usually sit down with a basic plan for a scene, but often the characters say "pffft" and off we go in a direction I'd never imagined. Or they actively fight the plan, tell me no way would they ever let that happen, and again, off we go...

Worry about one step at a time, and the most important one is the first - sit down and just write! Don't worry about anything but the voices in your head. Everything else will come later, and when it does, take one bite, chew it, and move on to the next. 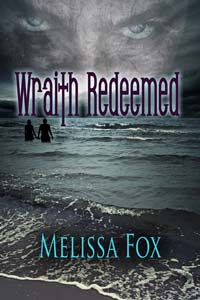 Demon-slayer Conor O’Shea is about to engage in the most dangerous encounter of his life—facing the woman he scorned.

For years, Merry Bradbury's world revolved around Conor O'Shea. After his sudden betrayal leaves her alone and heartbroken, she comes home to settle her past and move into the future. The last person she expects to see is Conor.

Conor never wanted anything more than forever with Merry. Discovering he is a Wraith warrior, honor bound to fight demons, destroys that plan. Merry is his Amorta, his one true soul mate, but he leaves to keep her safe from the evil that stalks him.

Eight years later, Conor's worst fear is realized, and he returns to defend Merry from his enemies. Can he save her from an unspeakable fate and reclaim her heart? And if he does, will Merry be able to accept all that he is?

WRAITH REDEEMED is currently available on Amazon for Kindle, with the official release in print and all electronic formats on February 15, 2013.


Great excerpt and please tell us about your next book.

I'm excited about it! The second book in the Wraith series, titled Wraith Enchanted, is under contract with The Wild Rose Press and currently in the editing stages. The hero is Jonas, Conor's good friend and fellow warrior from Wraith Redeemed. Jonas's wife, his Amorta, was killed by the demons he hunts and he's closed himself off behind a flip, devil-may-care facade. When his long-time friend Celia is threatened by demons, his protective instincts are roused. Cee's a spell caster, Jonas a spell catcher. What these opposites attract is definitely trouble!

Thanks so much for letting me visit!

Posted by Christine Elaine Black at 05:16