Thanks so much for hosting me today, Christine.

You're welcome Diane. It's a pleasure to have you as a guest.

First question: What draws you as a reader to the romance genre?
The HEA (Happily Ever After), for sure. Having spent twenty-plus years teaching high-school-honors –sophomore and senior-AP—world literature, the angst and tragedy of Thomas Hardy, Victor Hugo, Alexander Dumas, Shakepseare, Emily Bronte’s Wuthering Heights… Catherine and Heathcliff—talk about breaking your heart—etc.,  romance drew me like metal filings to a magnet. Well-written romance supplies plenty of angst, often mixed with lighter moments and humor, and the guarantee of love and happiness in the end rather than the cut-out-your-heart blow.
While I read only historical romance for several years, I’ve since widened my horizons to include all romantic genres and have found some delightful authors across the board.

Well, you're definitely qualified to talk romance. :)What is the most difficult part of writing a love story?
Balance. First, making sure I give equal time to both my hero and heroine. I tend to see my heroes more clearly; they always pop into my head before the heroine appears. Second, as I like to write sensuous rather than purely sensual scenes, I have to make sure there’s enough sexual tension and physical sizzle combined with the emotion. Had to add some of that sexual heat to Cherish the Knight to please my editor—and she was right!

Funny, I visualize my hero and spend lots of time in his head too. Is creating a title easy for you? Tell us about the process.
I always think it is…at first. Then, I realize the title may be too much of a spoiler. Or my two critique partners or agent suggest some neat alternatives. Nothing like numerous choices to make you rethink your “perfect” HAHA title.  I went through maybe a half-dozen before all three women high-fived Cherish the Knight.  And as I fell in love with my Viking hero, Cort, the moment I “saw” him, it felt right. Then, of course, I had to tweak the ending because I love it when the title appears in the story itself.

Yes, and I love titles that have more than one meaning. Do your characters love the direction you take them, or do they have other ideas?
They take me for a ride every time. As I’m a “pantser” rather than a “plotter,” my characters constantly surprise me. While I plan major plot points and essentially know the ending almost as soon as I begin a book, I have no specific idea how I’ll get from A to Z. A scene I thought I had worked out in my head takes a totally different direction once my characters begin to speak or interact. Sometimes I need to rein them in when they wander too far off the track, but more often than not, they say or do things far more interesting or clever than I ever could.  I love being sucked into their world rather than the other way around.

Any tips for writers that you’d love to share?
Persevere. I know it’s been said a thousand times, but it’s true. Believe in yourselves and don’t give up. There are so many new avenues out there now, from small publishers to self-publishing. Explore them all.
Write what you love. I know series are popular, but if that’s not for you, don’t do it. And whether you choose series or single title, make sure it’s with a fresh voice or unique concept. It’s true that there’s no such thing as a brand-new storyline. You just have to ensure yours has an original twist. From what I’m seeing, outside-the-box is increasingly popular.
Expect the unexpected. Social networking and self-promotion are both demanded and demanding. Trying to balance those with writing time is extremely difficult. But the best way to sell your last book is to sell another one. Also, if you haven’t already developed a thick skin, do so—quickly. Accept the reality that some of those you assumed would support you…those you’ve supported or helped along the way…well, they don’t. On the other hand, people you never expected…those you’ve only met online or haven’t heard from in forever or are busy, busy bestselling-author friends… offer to help without you asking. Put aside the hurt and negativity; concentrate on the wonderful. That’s what will make you smile and push you forward.

Great advice, Diane. Tell us about your next book.
My agent is shopping Pretty Girl, a romantic suspense.
I’m working on final edits for Beyond Words (which has already undergone several title changes LOL), a short contemporary romance set in North Carolina’s Blue Ridge Mountains.
I’m also struggling with reformatting another 11th-Century historical, as yet untitled, set on the Isle of Jersey and the West Coast of England.
Lastly, the tentatively-titled Knight of the Sun, the sequel (best friend of the hero) to the untitled novel mentioned above, is about two-thirds finished. 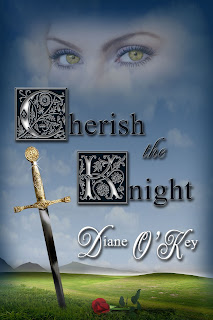 Ambushed as he approaches the English estate promised him by William the Conqueror, Lord Cort Dornogard dares trust no one...least of all the spirited Gaelic healer, Alexis Fallon, who fascinates even as she defies him.
The magnificent Norse warrior threatens both Alexis’ heart and her cherished autonomy, for she harbors a secret she cannot reveal about the ambush. Honesty will cost her her freedom. But silence may cost her far more.
Cort harbors a damning secret of his own—one guaranteed to foment rebellion among his new subjects. Escalating attacks and accidents on the estate further confirm that fear. His foes, both English and Norman, will exploit what he hides to destroy him, his dreams, and the woman he’s grown to love.
Snared in a web of castle intrigue, passion, and betrayal, Cort and Lexi are far more than either suspects. If they do not learn to trust, their enemies will destroy them both. Will they discover too late that truth is a two-edged sword?
Posted by Christine Elaine Black at 08:20