$25 Amazon GC
to TWO randomly drawn commenters
during the tour! 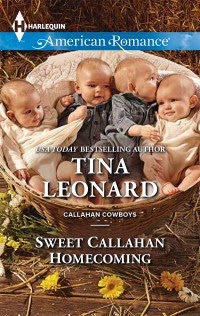 ~~~~~~~~~~~~~
Will Ashlyn Callahan finally find her magic?  The last Callahan rides in the exciting conclusion to the bestselling series, The Callahan Cowobys!

Ashlyn Callahan has always known that her fate can only bring danger to those she loves. That's why she flees Rancho Diablo—and the ornery cowboy she loves—to hide out in Texas Hill Country. But all hell breaks loose when Xavier Phillips finds her…and her four newborn babies.

Xav finally tracks down his warrior woman—only to discover she's the mother of two perfect little boys and two perfect little girls. And he's the father! Now Ash has to marry him. With the future of Ash's entire clan at stake, Xav is ready to lay his life on the line to safeguard the family legacy. Not to mention create a homecoming—and a wedding!—worthy of his Chacon Callahan bride!

Ash Callahan wasn’t easy to track. She used only cash. There were no phone calls, no computer emails to track. It was as if she’d disappeared—which she’d obviously intended to do. 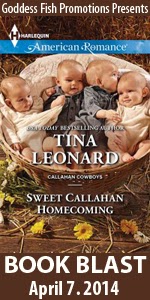 In the end, he’d gone to Running Bear for direction, only to be amazed that Running Bear hadn’t heard from Ash, either. Those two shared the same untamed spirit.

But Xav got a pointer or two from Running Bear that sent him on a path to find her. Now he shifted on the white-painted porch, hearing footsteps inside, hoping his journey wasn’t a dead end. It had been too many months since he’d held the love of his life in his arms.

A middle-aged woman opened the door, a questioning frown on her face. “Yes?”

“Hi.” He gave her his most friendly smile. “I’m Xav Phillips, from Diablo, New Mexico. I’m looking for a woman named Ashlyn Callahan.”

The woman shook her head, glancing over her shoulder when a baby’s cry burst in the background. “I’m sorry, no. I’ve never heard of her.”

He couldn’t say what made him linger on the porch. Maybe it was because he’d come so far and was so disappointed to find his search turning up a dead end again. Another baby’s cries joined the first, sending up a wail of epic proportions between them, which made the woman anxiously begin to back away.

“Excuse me,” she said, “good luck finding whomever you’re looking for.”

She closed the door. Xav hesitated, then leaned his ear against the wood. He heard soft voices inside comforting the babies, and then unbelievably, he heard a voice he’d know any day, any night, whether he was awake, asleep or even in a coma.

“Sweet baby, don’t fuss. My little prince,” he heard Ash say, and in a flash, he slid over to the enormous glass window framing the Christmas tree so he could peer cautiously inside the house.

Behind the large, ruffle-branched Christmas tree, four white bassinets lay together in a room decorated for the holidays amid beautifully wrapped gifts. He held his breath, watching Ash comfort a tiny infant boy. Ash’s shock of pale hair had grown into a waterfall of silver liquid she wore in a ponytail. Xav grew warm all over despite the cold, and Cupid’s arrow shot right into his heart, the same way it had every time he’d ever gotten within two miles of her.

He was head over heels in love with her, and nine long months apart had done nothing to diminish those emotions. The ring in his pocket practically burned, reminding him how long he’d waited to ask her to marry him.

She put the baby down and picked up another, a sweet, pink-pajamaed little girl, and Xav’s heart felt like it splatted on the ground. She acted as if these were her children, so loving and gentle was she as she held them. Xav was poleaxed with new thoughts of making Ash a mother. Motherhood and Ash weren’t a combination he’d ever really put together in his head, but watching her with these children made him realize his original proposal wasn’t the one he wanted to offer her.

He didn’t want to fall back on a business arrangement to save his ego.

No, he was going all in. He was going to tell her the truth about the shot she’d allegedly fired at Wolf, because clearly that was why she was hiding out here, helping the older lady babysit her family’s babies. Or maybe she ran a babysitting service. It didn’t matter. The point was, Ash was in hiding and he was going to tell her the truth: She was not the hunted one. She was not destined to bring destruction to Rancho Diablo and her family.

And then he was going to ask her to be his wife. 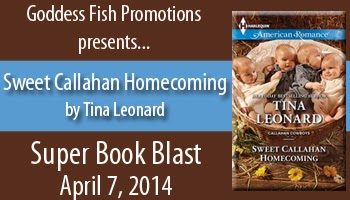 Tina will be award one $25 Amazon GC to TWO randomly drawn commenters during the tour.
Follow the tour and comment; the more you comment, the better your chances of winning. The tour dates can be found here:

Posted by Christine Elaine Black at 09:43