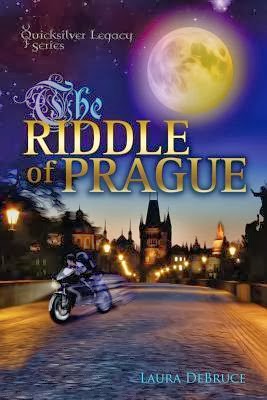 When 18-year-old Hana Silna travels to Prague to reclaim her family’s home, she discovers a riddle that may lead to a long-last flask.

The contents of that flask could change the fate of the world. When a ruthless enemy kidnaps her family Hana has to find the flask to rescue them. On her quest she meets a mysterious man with a penchant for poetry, a Gypsy girl with a haunting past, and Alex, an all-American boy who’s trying to save his sister from a crippling disease.   It’s hard to trust anyone when the stakes are this high — especially when surrounded by experts in deception.

There’s only one flask, and Hana desperately needs to find it. 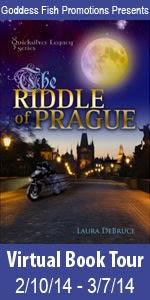 My mother says when we face our fears, we tap into a reservoir of courage. I’m not so sure. I’m strapped to this seat like a captured beast, and all I feel is panic. The airplane screams down the runway and thrusts its 800,000 pounds of steel into the sky. We’re taking off in the middle of a thunderstorm. My seatmate, immersed in a book, seems oblivious to the danger.

He’s got curly, blond hair that’s a little on the long side and one of those perfectly sculpted noses, and he’s wearing jeans and a batik-patterned shirt. Early twenties, I’m guessing. Not much older than me. The airplane gives a sickening lunge, and I tug the seatbelt tighter. My seatmate glances over, a bit eagerly, with piercing blue eyes.

“You all right there?” he asks with a crisp, European accent of some kind.

“This is the amazing part.” He gestures out the window, twirling his hand as if he’s conducting the storm outside. “Look!”

“I’d rather not.” The plane shakes, and I grab the armrests.

I’m only on this flight because my mother has inherited a house in Prague. Actually she’s reclaiming a house—the one where she grew up. The one the Communists took from her family when they seized all private property. My mom and dad had to escape when the Soviets invaded Prague in 1968. Now the Iron Curtain has lifted, and the people who left can finally return without being thrown into jail. Unfortunately for my mother, now means surgery and doctors. She’s at a hospital and can barely walk down the hallway, much less haul herself onto a plane. This didn’t matter to the bureaucrats in charge of the restitution of property. If the transfer of the house doesn’t happen immediately, they say it might not happen at all. That’s why my mother is sending me, her only child, in her place. That’s why I’m on this airplane instead of at the hospital at her side, where I should be. 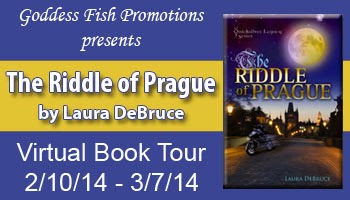 Laura DeBruce is a documentary filmmaker and writer. She grew up traveling all over the world thanks to her father’s work with the U.S. Embassy. She and her husband spent twelve years living in Europe including Prague, Paris, Amsterdam and London where she found inspiration to write The Quicksilver Legacy Series. In Prague she worked as a lawyer for the first private nationwide television station in the former Communist bloc.  It was there that she fell in love with the ancient city of Prague and its legends.

She lives in the Washington, DC area with her husband and son and an unruly Golden Retriever.

Posted by Christine Elaine Black at 06:38