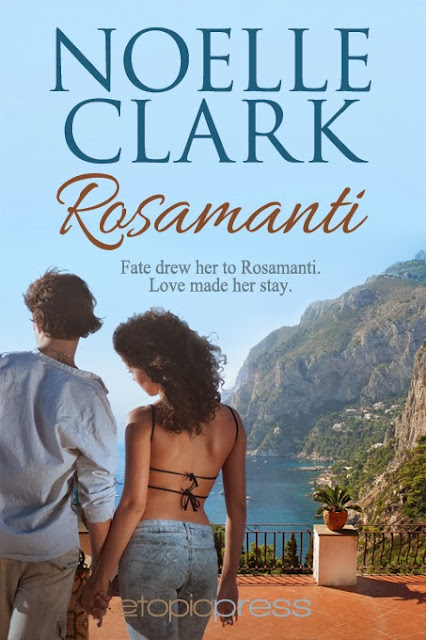 Sarah seeks solitude and fresh pastures in the wake of her husband’s early death. She answers a newspaper advertisement and takes up residence in Villa Rosamanti, a gorgeous 400 year-old dwelling nestled into the hillside of Monte Tiberio, on the Island of Capri, Italy.

She soon discovers a strong resonance with the house, the gardens, and the quirky pets. As the sun-filled days pass in the gorgeous old house, she builds a deep liking for, and rapport with, Elena Lombardi, the deceased owner. But it’s when she meets Pietro, Elena’s grandson, that she finds it’s not just the villa that she’s falling in love with.

Handsome, charming, and the epitome of a passionate Italian, Pietro lets the magic of Rosamanti work its wonders on Sarah. Together they search for ancient treasure, and end up finding each other, their love blooming like the rampant bougainvillea blossoms in the garden at Rosamanti. 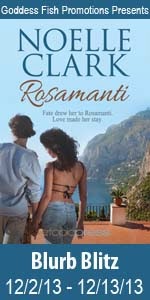 Soon they beached in the little patch of sand near the cave where he kept the boat. Jumping out, he stood knee deep and guided the dinghy to the water’s edge. Holding out his hand, Pietro helped her balance as she climbed out. He pulled the boat up onto the beach above the high tide mark, then reached in and got their clothes and backpack.

She spread out the beach towels. At home, she was used to soft, white sand, so fine that it was lovely to walk and lay on. This sand was more like roughly crushed shells and coral, sharp underfoot. He sat down next to her and opened the bag, taking out some containers of olives, cheese, and pastrami. Next, a bottle of wine and two plastic cups. She sighed loudly. He glanced up.

She impulsively reached over and wrapped her arms around his neck, kissing him warmly. When she looked at him, she felt her heart melting.

“Pietro,” she began, her voice thick with emotion, “you are the sweetest, kindest man in the whole world.” 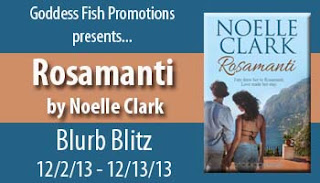 Noelle Clark is an Australian author who weaves romance, suspense and adventure into colorful and often exotic locations around the world. Widely traveled, Noelle uses real life experience of places, culture, and people, as a backdrop to her stories, giving the reader an authentic taste of the location. Her novels feature strong, mature, heroines and heroes, who - often without knowing it - are ready for new beginnings. Noelle’s characters, like her, believe that love can be sweet at any age.
Facebook:  http://www.facebook.com/NoelleClark.Author
Website:  www.noelleclark.net
Goodreads Author Page:  http://www.goodreads.com/author/show/7046284.Noelle_Clark
Amazon Author Page:  http://www.amazon.com/Noelle-Clark/e/B00CENUDLC
Twitter:  https://twitter.com/noelle_clark
Pinterest:  http://pinterest.com/NoelleCBooks/boards/

Posted by Christine Elaine Black at 20:25