$50 Amazon gift card,
Scottish shortbread cookies,
can cooler and mouse pad (US/CANADA ONLY)
to a randomly drawn commenter during the tour!
Leave a comment for a chance to win! 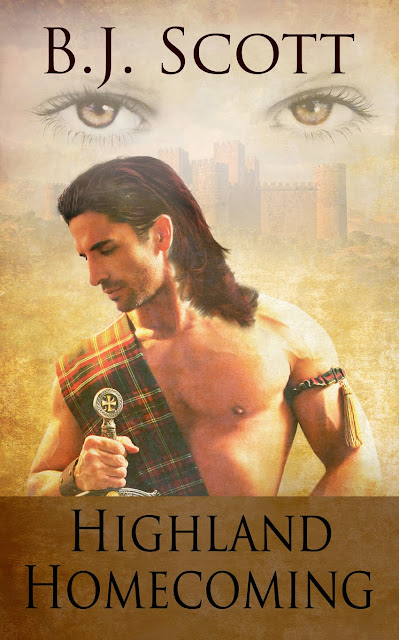 The last thing Alasdair Fraser expects to find on an isolated beach in Northern Scotland
is a beautiful, unconscious lass. Unable to turn his back on someone in need,
he delays his journey and tends to her injuries–an act that has him questioning
his destiny and his plans to rejoin the fight for
Scotland’s independence.

Will he drop the shield that guards his heart or will the secrets she fails to reveal
and his own stubbornness keep them apart forever? 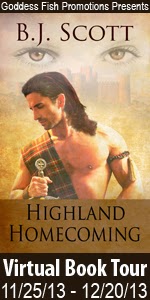 Hooves pounded against rocks, surf, and sand as Alasdair Fraser pushed his mount beyond reasonable limits. Few things rivaled the thrill and exhilarating rush of mastering the powerful destrier between his thighs, controlling the magnificent beast with reins and will. The wind whipped through unbound hair and the tangy scent of the salty sea air filled Alasdair’s nostrils.

He’d ridden hard all afternoon, hoping to reach the stronghold of his longtime friend, Jayden Sinclair. But the sun had slipped below the horizon, the twilight sky ablaze with orange, red, and purple hues. Darkness would soon be upon him and he’d be forced to make camp for the night. He licked his parched lips and his stomach rumbled. Many hours had passed since he’d last eaten, but a hot meal and a tankard of ale would have to wait. Water, oatcakes, and a bit of dried venison would suffice until he reached his destination.

He dug in his heels, and the steed surged forward. The more distance they covered before nightfall, the shorter the journey would be on the morrow. But as they rounded a bend in the shoreline, Odin faltered, reared up on his hind legs, then began to dance nervously from side-to-side. The battle-hardened warhorse didn’t spook easily so Alasdair took heed of the animal’s uneasiness.

They’d only traveled a short distance up the beach when the sight of something a few yards ahead at the water’s edge brought them to an abrupt halt. With his heart hammering in his chest, Alasdair cupped his hand over his brow and narrowed his eyes, trying to get a better look. The image came into focus and he could make out the unmistakable outline of a person sprawled out on the shore.

While this could be someone in need, it might also be a trap, an enemy or bandit lying in wait. Without hesitation, Alasdair slid from the saddle, pulled a claymore from the baldric slung on his back, and raced down the beach on foot. Stopping a few feet away, he sucked in a sharp breath.

He sheathed his weapon and took a step closer. A young woman, wearing nothing more than a thin nightrail, lay motionless in the sand, the waves of the incoming tide lapping at her bare feet. 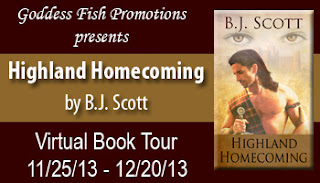 B.J. will be awarding a $50 Amazon gift card, Scottish shortbread cookies, can cooler and mouse pad (US/CANADA ONLY) to a randomly drawn commenter during the tour!

**Follow the tour and comment; the more comments, the better chance of winning. See Goddess Fish for full details! The tour dates can be found here:

Welcome, B J: Here's a little segment I like to call 'Romancing the Novelist' where I ask an author the questions that interest me from a reader's point of view.


Thank you, Christine, for having me on your blog today.

What draws you as a reader to the romance genre?

I am a romantic at heart, enjoy seeing love triumph over adversity, and am sucker for a HEA ending. I am also an avid history buff so writing historical romance seemed the logical choice. I love doing the research, finding out something new that I can share while hopefully writing a story that will not only tug at the reader’s heartstrings, but teach them something new about a bygone era.

What's the most difficult part of writing a love story?

There is a fine line between what is considered a historical romance and what is considered a historical fiction. Staying on the proper side of that line is not easy when you have done your research and have so much to share. In historical romance the relationship drives the story. Historical facts and events are there to set the scenes between the hero and heroine, but should not become the primary focus of the book. But readers of historical romances want the book to be as authentic as possible and will point it out if you fail to deliver. Before women’s status changed in the early 1900s, they were often treated like property, were subservient, uneducated, and had no say in who they married. Readers sometimes forget that women were not always treated kindly and the hero does not always act in a way they would like them too. Customs and traditions, the fact that many historical romances take place during a time of war or hardships, plays a big role in relationships and why characters might act on impulse rather than logic.  Since the reader wants a strong, independent heroine, the author must create an admirable character with spirit, but be careful to maintain the authenticity of the time period. The hero must be honorable, brave and swoon worthy.  Finding the perfect blend, one that will catch the reader’s attention and capture their hearts, having the pulling for the relationship is perhaps one of the most difficult tasks. After the book is published, I often see things I would have changed.

Titles seem to come easily for me. My first book, Highland Legacy was a working title, but the editor loved it so it stuck. Since I was writing a series, I selected titles that stayed with a similar theme and represented something significant in the book. Highland Legacy is about a turbulent time in Scottish history, when men and women had to fight for everything, including love. The key being that this history needed to be remembered and passed on to the next generation. Highland Quest shows the struggle of the youngest brother and his quest to find his destiny and happiness. Highland Homecoming is the final book in the series, it pulls the three books together and the hero must decide between duty and following his heart. Of returning to the place he was born, or starting a new life in a place he felt drawn to from the time he was a lad.
One thing I also do is check to see if anyone else has used the same title in the past. I try to be unique if I can and select a title that has not been used before.

Do your characters love the direction you take or do they have other ideas?

I have a basic idea of who my characters are and what makes them tick, but as the book is written things often change. Nothing is carved in stone, be it the plot or the characters until I write the end. Even then there is a chance the characters will change or take a different direction than originally planned. Watching you characters evolve and take on their own personality is very rewarding.

Share an interesting but little known fact about yourself.

Wow, that is a hard one. I guess the fact that when faced with writer block, I fill my claw foot tub with hot water and lavender bath oil, climb in, and while soaking I write. It amazes me how things come into focus and problem areas disappear along with the tension of the day. I have been known to spend several hours in the tub, working through a difficult chapter. In the end, besides looking like a prune ;)  I usually have a finished idea.

With a passion for historical romance, history in general, and anything Celtic, B.J. always has an exciting work in progress. Each story offers a blend of romance, adventure, suspense, and, where appropriate, a dab of comic relief. Carefully researched historical facts are woven into each manuscript, providing a backdrop from which steamy romance, gripping plots, and vivid characters—dashing alpha heroes and resourceful, beguiling heroines you can’t help but admire—spring to life. A member of RWA, World Romance Writers, Celtic Hearts Romance Writers, and Savvy Authors, B.J. also writes contemporary, paranormal, time travel, and romantic suspense.

C.S. Lewis first captivated B. J.’s imagination in the fourth grade, and her desire to write sprang from there. Following a career in nursing and child and youth work, B.J. married her knight-in-shining-armor, and he whisked her away to his castle by the sea. In reality, they share their century-old home in a small Canadian town on the shore of Lake Erie with three dogs and a cat. When she is not working at her childcare job, on her small business, or writing, you will find her reading, camping, or antique hunting. 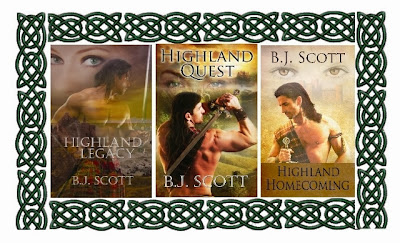 Posted by Christine Elaine Black at 19:43