$25 Amazon GC and
an eBook copy of 'An Inner Fire'
to one randomly drawn commenter! 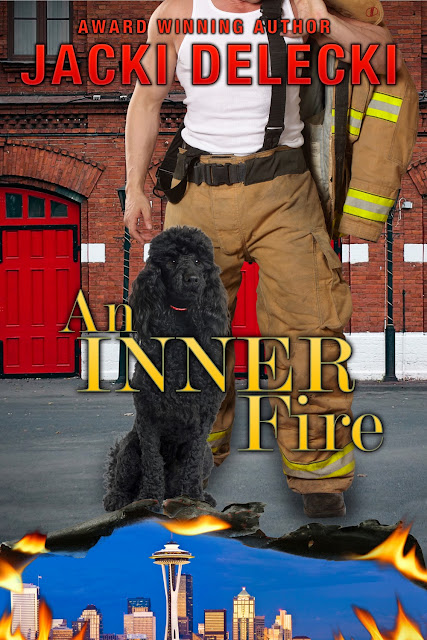 AN INNER FIRE
by Jacki Delecki

~~~~~~~~~~~~~
Grayce Walters, animal acupuncturist, harbors a secret. She hides her intuitive gifts from the world until she becomes embroiled in arson on Seattle’s waterfront.


As a key crime witness, Grayce must convince the attractive, logical, by-the-numbers fire investigator, Ewan Davis,that the fire she witnessed is part of a larger criminal conspiracy. Grayce embarks upon a mission to gather proof of the dangerous threat. She enlists the help of her cross-dressing best friend, her street-wise assistant, and Davis’ poodle, to conduct her own investigation. As her feelings for Davis shift between white hot passion and cold fear, Grayce must risk exposing her secrets to save Davis’ life. Davis must accept things, he can neither see, nor understand to solve the mystery and finally find the love he has stopped believing in. With nudges from the protective poodle, Grayce and Davis confront shocking betrayal and international crime on the rain soaked streets of Seattle. 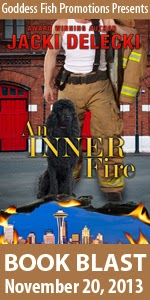 “Grayce, you’re exhausted. You had a big week, your trip to LA. You need to get some rest. I’m going to take you home.”

“I am tired but something is wrong. When I’m with you, I experience overwhelming sensations. I know you’re in danger.”

He pulled both her hands back into his, he had to touch her. “Grayce, you’re absolutely right. I’m in danger, but not from that thug.”

Her whole body stiffened. “Someone else has threatened you?”
He squeezed her hands and gazed into her eyes, trying to communicate his need for her. “Yes, there is a person who is a threat to me.”

I’m not tense from the investigation but from trying to deny what is between us. Don’t you know when we’re together the room vibrates? All those sensations you’re feeling are between us.”

He didn’t usually have to convince women they were attracted to him. Grayce definitely needed some convincing, judging by the astonishment in her voice.

“All the strain is us trying to ignore what’s happening.”

“You think everything I’m feeling is…is an attraction between us?”

By the shock on her face, Grayce wasn’t driven by desire for him.

“Don’t worry, my feelings aren’t hurt.” At least, not that he would admit. “I’m going to give you time to realize what a wonderful guy I am.” He liked a challenge and convincing Grayce Walters was going to be a challenging pleasure. 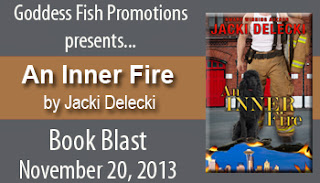 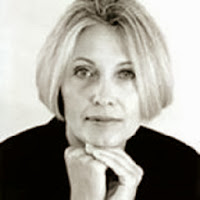 Descended from a long line of storytellers, Jacki spins adventures filled with mystery, healing and romance.

Jacki’s love affair with the arts began at a young age and inspired her to train as a jazz singer and dancer. She has performed many acting roles with Seattle Opera Company and Pacific Northwest Ballet.

Jacki has set An Inner Fire in Seattle, her long-time home. The city’s unique and colorful locations are a backdrop for her romantic mystery.

Although writing now fills much of her day, she continues to volunteer for Seattle’s Ballet and Opera Companies and leads children’s tours of Pike Street Market. Her volunteer work with Seattle’s homeless shelters influenced one of her main characters in An Inner Fire.

Jacki’s two Golden Labs, Gus and Talley, are her constant companions. Their years of devotion and intuition inspired her to write dogs as main characters alongside her strong heroines.

A geek at heart, Jacki loves superhero movies—a hero’s battle against insurmountable odds. But her heroines don’t have to wear a unitard to fight injustice and battle for the underdog.

Posted by Christine Elaine Black at 19:13