Today I'm pleased to have Sarah Grimm on Romancing the Novelist, and as always I wonder what draws my featured guest as a 'reader' to the romance genre?

I love the stuttered heartbeats when the hero and heroine first meet. I love the gut punch of sexual awareness, the sweetness of that first kiss, and the momentary panic over the realization they’ve fallen in love. And I especially love the idea how even at the worst of times, at those moments when you least expect it, two people can find love.

For me the most difficult part is the emotion. I’ve been told I write deeply emotional romances, and I guess I do. In my stories, the characters really have to work for their happily-ever-after.  I torture my characters more than most writers. It’s hard to do – at times downright emotionally exhausting to write – but in the end everything works out.

A lot of writers begin a story without a title in mind. Not so with me. I can’t lose myself in a story if it’s untitled. I can connect with the characters and flesh out their lives, but I can’t spend hours, weeks, and months bleeding on the page without giving that page a name. Talking with friends about my work in progress only works for me if that WIP has a title.
So the first thing I do is think about the tone of my book. Is it funny? Sexy? Serious? Does a consistent theme run throughout? Something that either the hero or the heroine needs to learn or acknowledge by the end of the book?
Once I’ve decided, then it’s time to brainstorm. I sit at my desk and make a list of words related to my book. Nothing is off limits. I write down everything I can think of that is related to my story, whether it’s an emotion, a setting, or a question.
At this point, one word usually jumps out at me – a word I KNOW has to be in the title. From there I play with word combinations and another list takes shape—a list of possible titles.
At this point I usually begin emailing writer friends and tossing around the titles. Why? For some reason I usually talk myself out of liking the my original choice, and tossing them around with friends gives great insight into the titles and how others interpret them. In the end, after driving my friends nuts, I find that my original title choice was the right one.

I’m what is called a ‘pantser’ which means I don’t plot or outline, I just ‘fly by the seat of my pants’ when I write. I usually have nothing more than a title, the names of my characters and a general idea of where I want them to end up. That’s when the fun begins! You’d think without an outline, it would make it easier for my characters to  go with the flow, but I still get those moments when one will do something totally unexpected. Sometimes they get away with it, and other times I have to reign them in.

Never let anyone or anything stand in the way of your dreams.  When someone says you can’t do something, go out and do it anyway. Prove them wrong! Criticism hurts, and no matter who you are or the amount of talent you may have, at some point we all receive criticism. It’s inevitable. The only thing you can do is hold your head high and keep moving forward. Do. Not. Give. Up. Whatever your dream, go out and grab it!

My work in progress is book two in my Black Phoenix Series, MIDNIGHT HEAT. Noah’s best friend and Black Phoenix bassist, Dominic Price is the type of man women walk into walls trying to get a better look at. Literally. At six-two with black hair that hangs in waves to just past his shoulders, and eyes so blue most people believe them to be contacts, Dominic is the epitome of a rock god. His British accent and killer smile don’t hurt, either.
Dom knows exactly how sexy he is and has been known to use it to his advantage. He’s a touch arrogant, has an amazing sense of humor, and a love for music that is only rivaled by his love of one woman. The woman he walked away from three years ago.
What I love most about Midnight Heat is…well, the hero. Dominic is probably the most alpha of all of my alpha heroes. He’s blunt, in-your-face, and curses too much. He’s also flawed, damaged by his childhood, and more sensitive than he would ever let on. It takes a very special woman to unravel Dom, and Rebecca Dahlman is just the one to do it. That is, if Dom can convince her this time around he’s in it for more than just the heat. 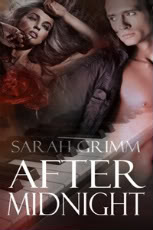 Book One in the series, AFTER MIDNIGHT, is available now. I hope you’ll check it out.
Here’s the BLURB:

Can music heal the fractured soul? Or will it tear them apart forever?

Thirteen years — that's how long Isabeau Montgomery has been living a lie. After an automobile accident took her mother's life, Izzy hid herself away, surviving the only way she knew how. Now she is happy in her carefully reconstructed life. That is until he walks through the door of her bar...

Black Phoenix singer/front man Noah Clark came to Long Island City with a goal — one that doesn't include an instant, electric attraction to the dark-haired beauty behind the bar. Coaxing her into his bed won't be easy, but he can't get her pale, haunted eyes nor her skill on the piano out of his head.

Can Noah help Isabeau overcome the past? Or will her need to protect her secret force her back into hiding and destroy their chance at happiness?

BIO: As a young girl, Sarah Grimm always had a story to tell. At times they were funny, other times scary, but they always ended with a happily-ever-after. Sarah spent years scribbling in notebooks, filling the pages with partial chapters and the margins with titles and story ideas. She told friends the characters spoke to her, and that she was compelled to get their stories on paper. Eventually, she sat down at a computer and wrote her first tale of dangerously sexy suspense.
Sarah lives in West Michigan with her husband, two sons and three miniature schnauzers. Between mom’s taxi service, her day job, and keeping the books for the family marine repair business, Sarah can be found curled in her favorite chair, crafting her next novel.


Posted by Christine Elaine Black at 21:35