Hi Nancy, and welcome to my blog. I’m pleased to have a fellow historical author with me today. The first question I always ask my guest is what draws you as a reader to the romance genre?


I’m a definite sucker for the happy ever after ending, and if I read a romance I want to be entertained easily. I don’t want the story to have too many unexplained aspects by the end, but I do want it to challenge a little as well. The hero needs to make me want to be right there with him, sharing his experience. I guess the opposite is true for the heroine – I don’t want to be her, rather that I want her to be ME. I read romances when I particularly want to open that ‘escape from reality’ valve. I like romances best when they are a bit out of the ordinary and yet must also be believable. Paranormal and sci-fi/ time travel romances still have to have to make me believe it could happen. My all time favourites are historical romances!

Yay, for the ‘historical romance’ faves. Now, what’s the most difficult part of writing a love story?

I think, for me, it’s really being consistent with emotions and making sure my characters are reacting in a believable way to the situations they find themselves in, and with each other. As a writer I chop and change a lot as I revise, always striving for something better, and the sensual parts of the novel are no different. My Wild Rose Press novels ended up much more sensual than when they were at pre-editing stages. More, more, more sex was the mantra from my lovely editor…so I added more!

Always good to add more sexual tension to keep the publisher happy. Is creating a book title easy for you? Tell us about the process.

No, I don’t find it easy. I’ve gone through a lot of names and re-naming of titles. I haven’t tended to have a title till the book has been well underway – with the exception of my TWRP novel TAKE ME NOW. The working title for that one was very similar, and morphed into the final title quite quickly. My TWRP novel – MONOGAMY TWIST- took a lot of jiggling. Management didn’t like my title suggestion and it took a fair bit of to-and-fro-ing emails before a compromise was made. Regarding my other novels my working title has been quite different from what I’ve ended up with. THE BELTANE CHOICE idea occurred during a major rewrite and TOPAZ EYES had a working title for a while as ‘Keira’ – the name of the heroine. I had written a good few chapters when TOPAZ EYES literally jumped out at me!

I would say mostly, yes! There are a lot of twist and turns, and often angry frustrations along the way for my main characters, but since they are romances of different degrees there’s always a happy end solution for them. The development of their characters might give them a bit of a jolt at times, but they get there in the end! My latest ancestral mystery – TOPAZ EYES – has a few secondary characters who would be saying quite clearly the opposite. They’d be mouthing something like - ‘that bitch of an author has bumped me off …or has sent me to jail!’ They’re not such happy chappies regarding the direction I take them in!

I still feel too raw an author to be offering advice, though I will reiterate what others say – keep at it. Bottle up the despair of rejection and find a new route to publication. The first tactic you use may not be immediately successful – if so try something else, but don’t abandon that first rejection if you really fee it is a story to be told!  My historical novel – The Beltane Choice –was rejected twice before I had it accepted for publication. In between those submissions I wrote Monogamy Twist to see if I would have more success with a contemporary novel. TWRP accepted it immediately, and then contracted me for TAKE ME NOW. During those TWRP edits I re-wrote The Beltane Choice and was over the moon to have it accepted by Crooked Cat Publishing.

Yes, if at first you don’t succeed….(had to throw that Scottish reference in there.) Tell us about your next book.

I’m currently writing a sequel to my historical - The Beltane Choice. I’ve had a lot of fits and starts with it and am currently more than half way done. I needed to do a lot more research of Roman Britain of A.D.71 -83 before I started, and feel the need to keep checking things as I go. As a writer of a Roman historical you’ll appreciate very much that there are few texts available to draw on for Celtic/Roman Britain of the Flavian era. Although that means my imagination should have more free reign, I still want to ensure that any historical detail that I adapt is as accurate as possible.

Thank you so much for inviting me here, today. It’s been great fun answering your questions!

Anytime Nancy. Thanks for an interesting insight into your writing. 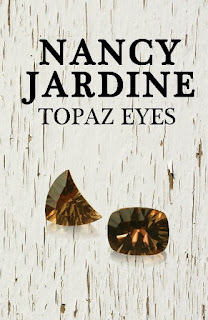 Topaz Eyes Blurb:
A peculiar invitation to Heidelberg embroils Keira Drummond in the search for a mysterious collection of extraordinary jewels once owned by a Mughal Emperor; a hoard that was last known to be in the possession of Amsterdam resident, Geertje Hoogeveen, in 1910.

Who among the progeny of Geertje – hitherto unfamiliar third cousins brought together for the quest – can Keira rely on? Distrust and suspicion among them is rife.

Which one is greedy, and determined enough, to hire thugs to tail her… and worse… as she travels to Vienna and Minnesota?  Can Keira even trust Teun Zeger - a Californian she is becoming very drawn to – as they pair up to unearth the jewellery?

As they follow a trail of clues, will they uncover the full collection before the hired gun kills them? Details remain furtive and undisclosed until danger and death forces their exposure. And who harbours the ultimate mystery item that is even more precious than the Mughal jewels?

With just sufficient presence of mind to make sure her key card was in her pocket, Keira snicked the door closed. Stumbling along the wall, her legs still a gelatinous mess, she pried open the heavy door to the emergency stairs.
Noises pounded from somewhere down below: shouts and bellows she couldn’t interpret. At first she couldn’t tell if someone was going down to lower floors or was coming up. Their room was on the eleventh floor, so there were plenty of floors above and below them.
Stilling her heaving breathing, she listened more carefully. The person was coming back up the stairs but the footsteps no longer powered their way. Edging back to the door, she’d no idea whether to wait or to retreat to her room. Her gaze scanned above, not for divine intervention, but purely because she was too cowardly to look below. There was no problem if it was Teun… but if it was the stalker? Her whole torso plastered against the cold metal, her breath stifled by panic.
A couple more flights by the sounds of the slowing footsteps. That inner sister berated her again, told her to get real and stop wimping. Opening her palms flush against the icy surface behind her, she willed some courage to return. One more flight. Oh God! She could now hear the laboured breathing of someone fighting with their fitness. Taking her unawares, anger roiled inside her and then erupted. Where her gall came from she’d no idea, but she was past caring.
“If you’re not Teun, I’m going to beat your head in! I’ve got a weapon here and the minute you come near me, I’ll not hesitate to use it, you thieving… prowler!
The minute the words gushed, Keira’s legs almost folded. What the hell had she just done? She gaped at her almost empty palms. A key card wasn’t exactly much use.

Posted by Christine Elaine Black at 05:45