Seven Sexy Sentences
Sexy can be many things: a look, a touch, a whisper, a smile. 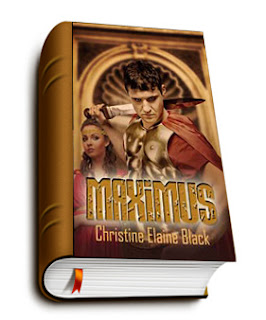 
They held hands under the table, neither one willing to let go. As soon as Milo reached the loft and snored softly, Maximus pulled Carissa into his arms. He kissed her once more with a slow, lingering kiss, full of joyful discovery and controlled desire. He didn’t roam the contours of her body as freely, now that she had revealed her family lineage as a noblewoman, with a once rich and famous father who might be important to Emperor Gregorian. Everyone believed Germanicus had died years ago, but when discovered alive, the Emperor’s generosity might stretch long and far.
Carissa turned her eyes to his face, scanning the handsome contours in close proximity.
“Get to bed, and bolt the door,” he whispered. “Tonight, I can’t be responsible for my actions.”

Thanks for stopping by to read a snippet of MAXIMUS where the mutual attraction developing between the main characters is heating up.

Here is the link to more sexy snippets:
SexySnippets-TheNutHouseScribblersBlog
OR:
http://thenuthousescribblers.blogspot.co.uk/p/sexy-snippets.html
Twitter Hashtags:

#Romance #authors sign up for #SexySnippets and find more #readers

Posted by Christine Elaine Black at 19:33