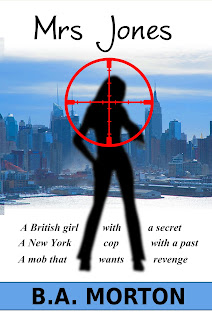 Today I have the fabulous Babs Morton with me. She writes a little romance into her cop series featuring the handsome detective, Tommy Connell. And I sure love reading about that hunk.

Welcome Babs. And first question is what draws you as a 'reader' to the romance genre?
Well, I suppose it’s because of the attention given to characterisation. I like the build up from that first meeting, sharing the journey, the misunderstandings, the angst that is inevitable when two individuals adjust to each other and of course, the chemistry and hopefully the happy ending.

What is the most difficult part of writing a love story?
It has to be believable and for me personally it has to run in parallel with a story/life that is ongoing. I create characters to carry my stories, I create worlds for them to inhabit and then I throw them together and hold my breath to see if they like each other. I want them to gel and I’m rooting for them with every situation I create, in the same way I might match-make for two single friends. Love isn’t all hearts and flowers sometimes it’s hard-won and tearful. I think it’s important to show challenge if the prize is worth fighting for. All my books have an element of romance, some more than others, but essentially they are crime fiction or historical fiction and my characters usually have a lot to contend with in addition to each other.

Is creating a book title easy for you? Tell us about the process.
The title always comes first and the story germinates from that. Mrs Jones the first book to feature my characters, Tommy Connell and Lizzie, stemmed from the song of the same name. I wondered about the lives behind the two lovers in the song who maintain their romance though they know it’s wrong. With the second book in the series, Molly Brown, I named the little girl in the story and everything else followed on. The title could come from anywhere. Usually, once I’ve decided on a name I don’t change it.

Do your characters love the direction you take for them or do they have other ideas?
They pretty much do as they please, which is fine as I never know how the book will end up anyway. I have a basic plot in my head, but the characters evolve as I write. I’ve gone back and changed scenes on a number of occasions, when I realise my character would not have done, or said what was written. That’s what I like about writing a series or trilogy, you have time to get to know your characters inside and out and it’s fun to put them in situations which you know will challenge them. My characters are always up a tree and I continually throw rocks at them.

Wow, I love that image of rocks and trees. Any tips for writers that you'd love to share?
When creating characters, look around you, identify the behaviours and attitudes that you like or don’t like about people you know. Allowing character flaws adds balance and creates empathy with the reader. There’s none of us perfect, we’ve all made mistakes and learned from them, so allow the same for your characters.

Bedlam is a haunting tale of obsessive love and ultimate sacrifice.
If you lost the love of your life, how far would you go to get them back?
Detective Joe McNeil would do absolutely anything.
When Joe breathes life into a killer’s victim, he discovers what anything really means.
Nell will use whatever means necessary to ensure she survives, including Joe. Is she really the victim or merely the weapon being wielded by a much more cunning foe?
As Joe struggles between his love for missing, Kit, and his growing obsession with the enigmatic Nell, he risks his career, his sanity and his life.
But for Nell, the risk is even greater.

Its Gothic crime... a little scary, but basically a heart-wrenching love story.

Babs: Thanks for visiting 'Romancing the Novelist' and sharing with us. Stop in anytime!

A British girl with a secret.
A New York cop with a past.
And a mob that wants revenge

In the slickest, sneakiest twistiest-turniest hard-boiled crime noir novel to come out in a long time, ruggedly pragmatic but honest cop Detective Tommy Connell picks up an English girl, Mrs Jones, who claims to be the witness to a murder, and promptly falls in love with her.

Well, Mrs Jones, whoever she is, must be very attractive because an awful lot of people seem to want to get their hands on her if they can prise her from Connell's determined grasp, including some prominent representatives of organised crime and the Feds.

Detective Connell definitely has his work cut out here if he wants to end up with the body of Mrs Jones, dead or alive, that's for sure.

All-in-all it's probably safe to say he hasn't a clue what is going on. It is probably equally safe to guess that Mrs Jones does.

Not that 'safe' is quite the right word to use here or, there again, maybe it is.

“What are you thinking?” asked Lizzie.
“I’m thinking maybe we should swap jobs. You would make a good detective and I’ve got a great bedside manner.” He pulled her with him into the stables. “You want to see something really cool?”
“Not if it involves you removing any of your clothes.”
Connell grinned and kissed her gently, “You are so funny, you know that?”
Lizzie kissed him back. “I try.”
“If I took my clothes off, you wouldn’t be saying 'cool', you’d be saying 'wow'.”
“You forget. I’ve seen you without your clothes.”
“Okay, enough of the flattery, here’s what I really want you to see.” He led her to the stall that held the mare and her new foal. “Is that cute, or what?” The little filly stood next to its mother, long legs, big eyes and a curly mane. “She reminds me of someone. I was thinking of calling her Mrs. Jones. What’d you think?”
Lizzie leaned back against him and smiled, “You know, despite your preoccupation with sex, you have a lot going for you, Connell. You have a gorgeous little boy, a lovely family–and you have a horse! Now that is cool. I’ve always wanted to meet a real cowboy.”
“Really?” He put his hands on her hips, pulled her into closer contact, then slid his hands around her waist beneath her t-shirt and kissed the back of her neck. He felt his heart begin to speed up, his blood begin to pump and he felt her skin prickle beneath his hands. Oh yes, cute ponies were almost as good as cute puppies for tugging at the heart strings. He hadn’t lost that Connell charm after all.
She pulled away with a shrug, “Shame, then, you’re a policeman and not a cowboy.”
He narrowed his eyes and smiled at her. “You asked me before what I was thinking. Do you want to know what I’m thinking now?”
“Maybe not ….”
“I’m thinking I could be arrested for what I’m thinking, and you could be arrested for making me think it. Get the picture?”
“I’m trying to imagine it ….”
He shook his head. “Don’t, just don’t.” She laughed and he squeezed her hand. He didn’t really want to let go. “As a nurse, you should know better. When guys die of a broken heart, that’s literally what happens. Forget the flowers and romance, their women mess with their minds so much they have a friggin’ coronary.”
“Am I messing with your mind?”
“You’re messing with more than my mind.”
“Would you like me to stop?”
Would he like her to stop? Was she crazy?